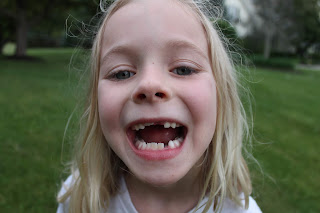 Just look at that face.  Spaces everywhere!  It will never be the same smile again!!!  The top "hillbilly" tooth, as we called it, was a cliffhanger until a routine dentist checkup took care of it.  Then just a few days later here she comes home from school with the bottom tooth missing.  According to the first grader it went a little something like this...

"So I was going across the monkey bars and another girl was coming across facing me.  So I decided we both didn't have enough room to pass each other so I just let go and fell.  It was a crazy fall, I hurt this elbow, then this elbow, then my butt (*butt with two T's).  When I stood up, I was like, whats that rolling around in my mouth?  And I put my fingers in there and it was my tooth!  I guess the fall bumped it out!"

So this brings us up to the second visit from the toothfairy in one week.  First one success.  Second one, not so much...apparently Ms. Fairy was overbooked and didn't make it to our house.  The next night something weird happened.  When Hope woke up she got ready for school and mentioned something about forgetting to look under her pillow.  uh oh.  Anyone looking???  I think there might have been a mad dash from the tooth fairy at that very moment.  Shew glad she made it.  Who says the tooth fairy only travels at night?  Where's your imaginations, y'all???  ;)