OK, I'm going to lay it all out here - just as a warning, this post is not for the queasy, squeamish, or members of PETA.

It does, in fact, contain pictures of an adorable little princess sporting a frilly pink tutu.  However do not be alarmed to find her actions do not match the outfit.

We ain't your typical suburb princesses here in Fox Run.

And keep in mind this blog is a scrapbook of our life....and sometimes our life is weird.

So the story goes...
We have had a mole.

It was marking his territory all through the back landscaping where we have been hard at work producing tomatoes, peppers, squash, zucchini, and cucumbers.  (I told you we weren't the typical house in the suburb!)  These plants are taken seriously around here and Mr. Mole was really starting to get under my skin...no pun intended. What to do, what to do....with kids and a dog on the back porch, poison couldn't happen and all the wives tales of getting rid of moles seemed just that.  hmmmmmmm....

The weekend of Hope's birthday, our neighbor of endless knowledge explained to us he would catch the mole.  Catch?  What?!?!  Seriously?  Yep, he was.  According to Mr. Jacobs, there are patterns the mole runs and a few hours of peace and solitude on our porch and he would have that mole in his bucket.

Apparently, Mr. Jacobs has a reputation in catching moles and further explained a bit of his tactics to me.  He described himself as "one with the mole."   Sooooooo, he's blind?

Well the birthday festivities past (and yes, I know I'm blogging about a mole BEFORE blogging my daughter's 2nd birthday - stellar.)  1:00 Monday, lunch was over and the girls we sending Grandma off, blowing her hugs and kisses as she pulled out the drive.  Emma went inside, Hank still barking outside, and Hope not wanting to go back in.....and I see the dirt move.  Oh ya, up and down, right by my pepper.  Oh geesh, what do I do - it's the mole!  Knowing Mr. Jacobs history and vast mole knowledge, my first thought was to leave him be and let the mole catcher complete the job that evening.  But holy smokes the pepper plant just went sideways.  Enough was enough!  I had had enough of this pesty varmint because no one messes with this momma's peppers!

90 seconds of pure adrenalin.  I race to grab a shovel and bucket.  The neighbor's pitchfork was already in the zone.  I couldn't remember "stick the shovel behind, stick the shovel in front"  crap....just stick it!!!!  And that I did.  Behind....because a mole in danger will immediately turn around (mole lesson #45 from the mole catcher).  And that he did.  I ignored my 2 year old and the dog and just keep digging with that pitchfork.  1 fling, (ack there he is!), 2 flings, 3 flings a pitchfork and out he flew!  Stinkin' mole immediately stuck that nose and began to burrow back in the grass (as described in mole lesson #68).  Luckily I had my bucket and scooped him up in it.

"Hooray hooray, Mom got the mole!!!" I hear Emma shouting from inside - who knew I had a fan club on the other side of the window.    She was more stoked than me....and here is where that adorable pink tutu comes into play. 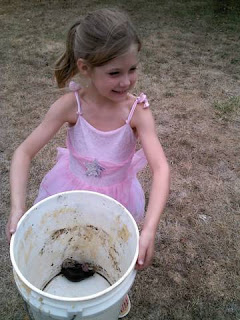 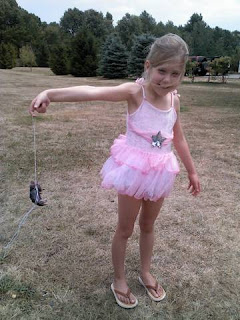 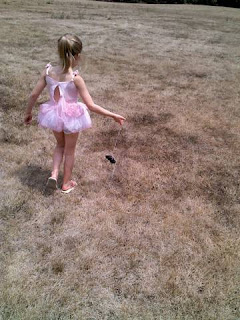 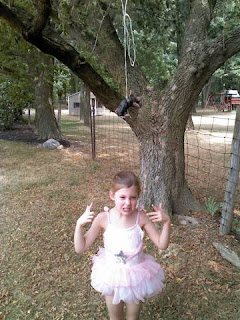 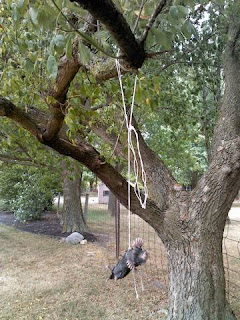 And there he hung.  Scrappy Mr. Mole.  Thanks for an exciting day here in the suburbs.
Sincerely,
The Mole Whisper
Posted by Jill at 2:41 PM