So after digesting all the pictures it dawned on me I never got a picture of both girls in their jammies by the tree. You know, the traditional Christmas morning picture. So midway through January here you go. 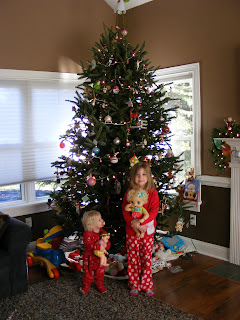 It also became apparent after sorting through all the travels and Christmas parties that Hope ended up with a lot of dolls. Really....does a girl that won't sit still for more than two seconds need seven dolls? Heck ya. 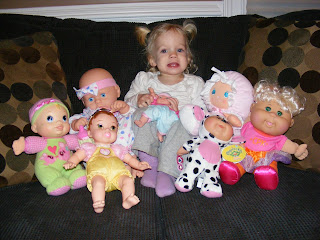 And last but not least, there was chaos in Bethlehem this year. The word on the street is a blond bombshell imitating Goliath was found climbing the desert hills (aka piano) and landed upon the manger scene only to be found chucking it piece by piece onto the hardwood floors. The noise alerted nearby tax collector (aka Dad) and the blond Goliath was swooped away from the scene, punished, and never to be found on piano - I mean desert hills - again. Two casualties remained...one lamb lost an ear and another lost a leg. Baby Jesus was left unharmed. It was heard later, the village doctor (aka Mom) was able to attach all limbs back onto the respected animals with none other than superglue. 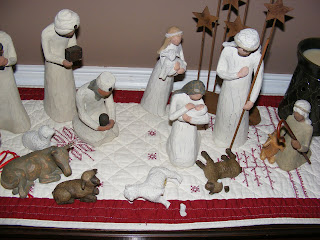 Happy Birthday Jesus. Can't wait to celebrate it all again.
Posted by Jill at 11:37 AM