Most of my blog posts revolve around my precious two blond bombshells. They are the center of my universe. Today however, I just can't get my mind of two other little kids...whom I am positive were the center of the universe to their daddy.

Yesterday, the Indy race world lost a driver due to a rare and unbelievable accident on the track. Dan Wheldon's life was ended here on earth as I am sure you all have heard on the news by now.

I'm not a race fan by any means, but I am a fan of good guys. Dan Wheldon was one of those guys. He had made an impact on our home through my husband's work at Eli Lilly. Adam currently works on a brand that is developing what hopefully can detect and change the world of Alzheimer's disease. As part of the marketing and research team, his group has paired up with the late Indy car driver. Dan's endorsement was more than just that...it was personal.

Dan's mother suffers from the Alzheimer's disease. There was never a moment that when speaking of his mother, his eyes didn't well up with tears. Dan's desire to support the pharmaceutical world to stop this disease went beyond an endorsement deal. It was a heart warming sincere effort to see lives be changed. Just two weeks ago, Adam was fortunate to have lunch with Dan and hear him speak yet again of the importance and appreciation for what people like my husband and colleges are doing. He mentioned his mom, but also this time of his dad and the impact the disease is taking on him as the caretaker of his mother. He gets it. It's easy to see where there isn't a race, a dollar, nor a victory that outweighs his love for not just his family, but the opportunity to make a difference in other families.

His family. Left behind is a wife and two sons. Two young sons. Ages two and 8 months. My heart aches.

Many Sunday evenings, I look at the calendar and look at my "race" ahead for the week. I've done it a million times...round the same track...over and over. Yet, when do we know that same path of driving in the fast lane to get things done can all come so quickly to a halt? We don't. I hug my two girls extra today.

As for the Wheldon family, my thoughts go out to you. While Heaven multiplies, we are minus another good guy her on earth. 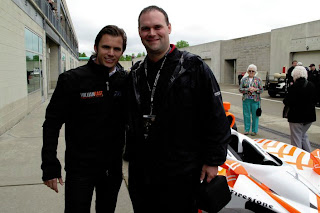