Our Artist....Tattoo Artist that is...

So when your four year old comes up to you and says, "Mom, look at my new tattoo!" Should I:
A) Be thankful she can't drive, so I know it's not real...yet.
B) Be a little concerned that she can't drive so I know whatever she has done she did here at home by herself.
C) Be honored she thinks like her Daddy and saved money by creating this herself instead of paying a stranger big bucks.
D) Be thinking, "will it come off?!"

She further explained to me it was of a football. And yes, it was....a rather large football. 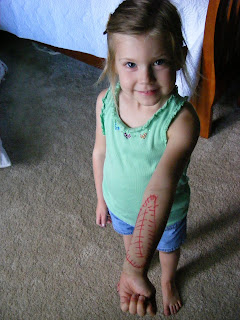 The star parents we are, we first laughed, then took pictures, THEN disciplined her letting her know to not use markers on her skin. Apparently that wasn't the best order, because the next day there were more tattoos all up and down her legs. No laughing or pictures this time...just a good hard scrub down with a few choice words. (The laughing came later after she went to bed!)

Someone remind me of this story when she comes home from the first semester of college with a real tattoo. Parenting - love it.
Posted by Jill at 9:00 AM